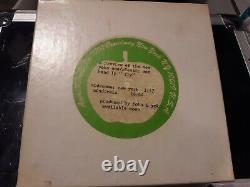 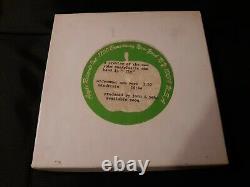 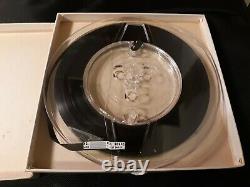 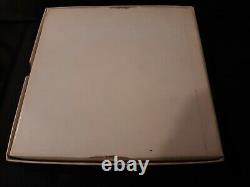 The Bell Records leader tag at the end of the tape was still affixed to the outside of the plastic take up reel the promo tape was on. The adhesive was disloged in order to play the reel to reel tape to make sure that the tape had not deteriorated. The tape is in excellent condition.

It is in a 7 inch reel 2 reel box with an Apple Records acetate logo on the front upon which the informational text easily readable in the photo was typed. The tape contains the Yoko Ono songs Midsummer New York and Mind Train The tape is about 24 minutes long. Back in the early 1970s a few of the radio stations at that time still used reel to reel tape machines so that it is concievable that this tape was used to provide maximum music fidelity to those radio stations.

To call this Apple Records promo is putting it mildly. While Apple Records did release commercial reel to reel tapes of the Beatles and other individual artists in the 1970s, I have never seen a promotional 1970s Apple Records reel to reel tape before. This is one selection out of a highly important collection of acetates, test pressings, standard production records and entertainment awards from a media collection that ranges from the 1950s through the 1990s and was owned by a highly talented and diverse individual who served in a variety of jobs in the music and movie divisions of the entertainment industry most notably including serving as a Director in the Promotions Department of the Beatles record company, Apple Records. This individual also worked in the executive office of Phil Spector Productions in the early to mid 1970s.

Most of the acetates and test pressings in this collection had standard record studio acetate and pressing plant test pressing labels but there are some from earlier in the audio review s. Tage of record production that have no labels at all. Unlabled reference acetates have to be listened to on a record player in order to determine what they are.

As I said, The former Apple Records employee who owned this test pressing also worked with Phil Spector on a regular basis. I was told by this employee that Phil Spector would frequently discard record production materials such as acetates and test pressings, recording equipment and regular production records once he no longer needed those items. Check my past and present listings for more rare Philles and Apple Records records, acetates and awards.

This test pressing will come with a Letter of Authenticity signed by myself. My name is Christopher Chatman of Beyond Records and I have been writing and dealing in test pressings, acetates, gold record awards and extremely rare music items since 1977. The article was published in the 1990 book "Goldmine's Rock N' Roll 45 rpm Record Price". The item "Yoko Ono Apple Records 1971 Promo Reel 2 Reel Tape 4 Fly LP John Lennon Beatles" is in sale since Saturday, October 17, 2020. This item is in the category "Entertainment Memorabilia\Music Memorabilia\Rock & Pop\Artists L\Lennon, John". The seller is "carnivalcollectibles" and is located in Running Springs, California.