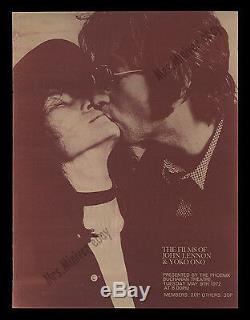 The very famous bed-in peace rally, which is arguably the most notable section of John Lennon motion picture footage ever shot, was a. Mong the films that were shown. This poster was made using a hand-processed fine art silkscreen process, and so not many could have been originally produced. The choice of using silkscreen certainly added a dimension to the photograph, especially with the use of the flat (matte) ink. The slight streaking you see on the poster is from the original silkscreen process.

That's VERY common with all silkscreen art. The streaking is most visible on the top left white background and on the jacket near Yoko's buttons. Silkscreen is widely considered a fine art medium in the museum world. This particular poster and its design is quite.

Exquisite, to say the least. It's also quite RARE! I've never seen another become available in over 20 years of scouring the web specifically for John Lennon film related posters. Let's face it, this image is second to NONE - that is, John Lennon or JOKO wise.

Without the in-your-face punch of nudity, this intimate close-up portrait of the famous duo celebrates the couple's determined love with an even greater force: Yoko's chin! This poster follows through with all the seriousness and dignity the two worked so hard to promote themselves with. It's a classic document representing the music and the politics of an important era - the 1970's (late'60s too) - not to mention, it also represents some of the most avant-garde. Cinema of note that's actually been somewhat accepted by society. This is a unique contemporary (mid to late century) film poster!

The poster measures 18x24 inches and is in FANTASTIC EXCELLENT ++ Original ROLLED NEVER-FOLDED CONDITION! It's remained unrestored for over 40 years, but, it probably would look better if it were linen or paper-backed. However, it's nice just like it is. I've had it stored between acid free paper for 15 years now. I've never made it available before now. I'll send the poster rolled in a special crush-proof tube. It can crash regardless of any decision you make and can even crash regardless of any decision made by the company related to the stock - Leaving you with a near worthless piece of paper that won't inspire anyone! The magnificence of art and historic documents have an inherent value that relates to civilization and society.

Please write with any questions. If you're in the market for top quality original vintage movie posters or Star Wars, then please.

The item "THE FILMS OF JOHN LENNON & YOKO ONO 18X24 ORIGINAL 1972 Beatles MOVIE POSTER" is in sale since Thursday, March 26, 2020. This item is in the category "Entertainment Memorabilia\Music Memorabilia\Rock & Pop\Artists B\Beatles\Posters".miniver" and is located in Los Angeles, California. This item can be shipped worldwide.