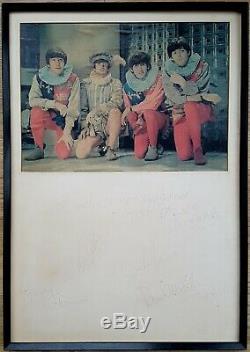 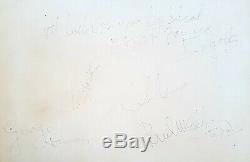 A fabulous set of autographs, signed to the mount beneath a print of The Beatles in Shakespearean costume. The image captures a scene from The Beatles 1964 television special, Around the Beatles.

The show included a far-fetched interpretation of Pyramus and Thisbe (Act V, Scene I) from William Shakespeare's A Midsummer Night's Dream. Ringo Starr was cast as Lion, George Harrison as Moonshine, Paul McCartney as Pyramus, and John Lennon as his extremely camp lover, Thisbe!

The show was recorded in London on 28 April 1964, and broadcast in Britain on 6 May 1964, and the US on 15 November. The mount beneath the image features the notably large autographs (each between 4 and 5 inches in length) of John Lennon, Ringo Starr, George Harrison and Paul McCartney. Lennon penned a typically witty inscription "Good luck with your hysterical project from ye Beatles xx". McCartney also added thank you sir!

Visible image of the print is approximately 13 x 9.5", with the total size of the piece including vintage frame at 21.75 x 15.5". The print appears to come from a publication and has unobtrusive creasing and light wrinkling in a couple of places.

The autographs are penned in black ballpoint. They are a shade light, most conspicuously to thank you sir! An unusual set of autographs, both in size and content.

We always stand behind the autographed material. The item "THE BEATLES large set of framed autographs signed John Lennon Paul McCartney LOA" is in sale since Thursday, December 5, 2019.

This item is in the category "Music\Music Memorabilia\Artists/ Groups\The Beatles". The seller is "london_collectibles_limited" and is located in London. This item can be shipped worldwide.