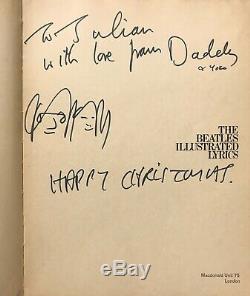 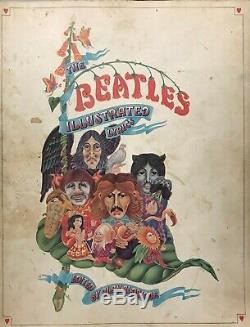 "The Beatles illustrated lyrics" book inscribed by john lennon to his son julian for christmas. This copy of "The Beatles Illustrated Lyrics" edited by Alan Aldridge provides a glimpse into a strained father-son relationship. On the half-title reads: To Julian with love from Daddy & Yoko. Happy Christmas accompanied by a sketch of John and Julian.

Presumed to have been gifted to Julian in 1969, this gift would mark a period of estrangement between the two following the divorce of John and Julian's mother Cathy. This collector's item is particularly poignant in that included in the collection is an illustrated version of Hey Jude. " Amid the divorce the year prior, Paul McCartney (a father figure to Julian) would frequently visit the child and eventually improvised a song called "Hey Jules to help ease his anxieties.

The song later became Hey Jude. Associations aside, this is a fine copy of a Beatles fan must-have as it features commissioned psychedelic illustrations by renowned artists of the day to accompany the words of The Fab Five. Contributing artists include Peter Max, Tomi Ungerer, David Hockney, Folon, Erte, and Ronald Searle. This piece can be viewed at our brand new gallery APR57 at 200 W 57th Street, New York, NY 10019.

11 x 8.5 inches. Black ink on half-title page. To Julian, with love from Daddy & Yoko. Send us a message regarding any questions you may have regarding the item you're interested in. Since we are wholesalers, all items are subject unsold. Bank Wire is accepted for certain Items. We have the largest selection of watches in the world. Over 25,000 pieces in our collection! In business over 30 years! Located on the prestigious 57th St in New York City directly across from the world famous Carnegie Hall and The Russian Tea Room and a block from The Plaza Hotel Trump Tower. We also offer layaways and accept trade ins and exchanges. Over 100 years of combined experience. We have been recommended by Time Out New York as well as a number of radio and TV stations here in New York City. We have over 25,000 watches including both new display and collector's models as well as vintage pieces.

We handle all fine artwork, stamps, coins, jewelry, etc. The item "The Beatles Illustrated Lyrics Inscribed by John Lennon to his Son Julian 1969" is in sale since Friday, December 20, 2019. This item is in the category "Entertainment Memorabilia\Music Memorabilia\Rock & Pop\Artists B\Beatles\Other Beatles Memorabilia".