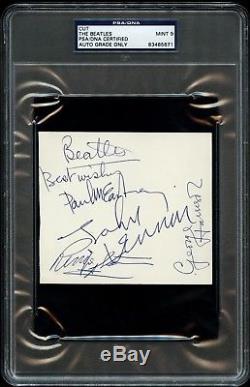 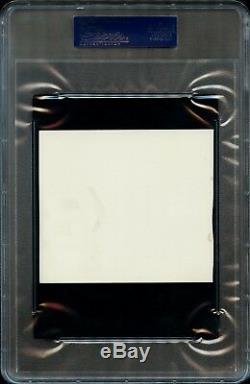 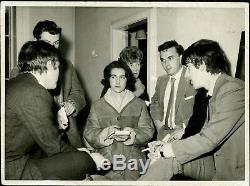 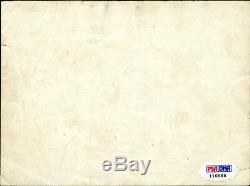 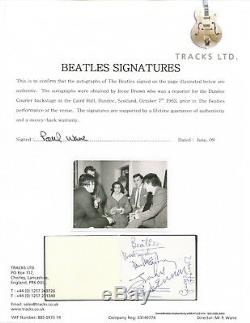 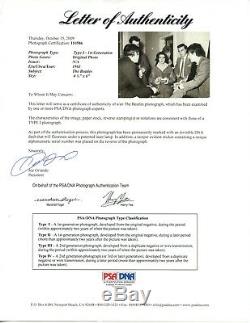 McCartney added the inscription "Beatles, Best wishes" before signing, most certainly adding to the tremendous visual display. Truly one of the finer sets of Beatles autographs known to exist. The autographs were obtained by Irene Brown, who was a reporter for the Dundee Courier, backstage at the Caird Hall, Dundee, Scotland on October 7th 1963, prior to the Beatles performance at the venue.

Included with the set of autographs is an original photo (6 x 4.5 inches) of Irene Brown, pen and pad in hand, interviewing John Lennon and George Harrison backstage at Caird Hall in 1964. The photo has been certified as a "Type 1 - 1st Generation" by PSA/DNA. It should be noted that research has verified the identity of Irene Brown in the photo This very image is featured in the March/April 2003 issue of Artwork, a free newspaper distributed throughout Scotland and into the north of England. The photo was used in conjunction with an article covering an exhibition of photographs commemorating the Beatles' second appearance at Caird Hall in 1964. The item "The Beatles (4) Signed Autographed Cut PSA/DNA Graded MINT 9!

John Lennon" is in sale since Wednesday, January 30, 2019. This item is in the category "Entertainment Memorabilia\Autographs-Original\Music\Rock & Pop\Other Orig Rock/Pop Autographs". The seller is "cab-collectibles" and is located in Revere, Massachusetts. This item can be shipped to United States.