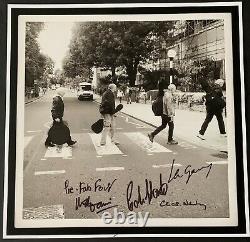 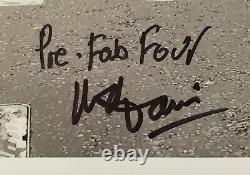 A very rare opportunity to own a matt finish 12x12 inches photo hand signed by John Lennon's Quarrymen members Rod Davis, Len Garry Colin Hanton and one time Beatle Chas Newby. 6th July 1957 was a pivotal day for the history of modern music: it was the day that John Lennon met Paul McCartney for the first time.

In the afternoon the Quarrymen skiffle group played at the garden fete of St Peter's Church, Woolton, Liverpool. The performance took place on a stage in a field behind the church. In the band were Lennon (vocals, guitar), Eric Griffiths (guitar), Colin Hanton (drums), Rod Davies (banjo), Pete Shotton (washboard) and Len Garry (tea chest bass). This photo features the current Quarrymen line up crossing the famous Abbey Road. Tells the story of Liverpool-born drummer, Colin Hanton, who was an original member of John Lennon's skiffle group, The Quarrymen, which eventually evolved into The Beatles. The original surviving members of The Quarrymen band to perform in Abbey Road's Studio Three. The members included Colin Hanton, Chas Newby, Len Garry and Rod Davis and the footage is to be included in PRE FAB! In December of 1960, Newby performed four gigs as a bassist for the Beatles. Len Garry has added'Pre Fab Four' to the image. Great rare piece for a Beatles collector! I do not sell reprints, only genuine hand signed items. Please check my other listings for more great action figures, records, collectables and autographs etc!

If you have any questions, please don't hesitate to contact me. This item is in the category "Music\Music Memorabilia\Artists/ Groups\The Beatles". The seller is "lsarswal" and is located in this country: GB. This item can be shipped worldwide.