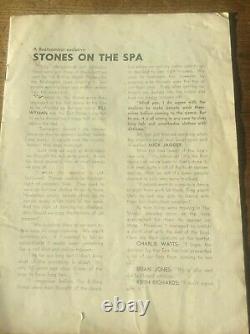 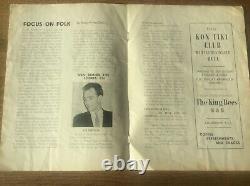 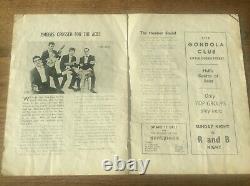 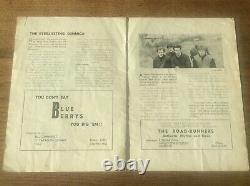 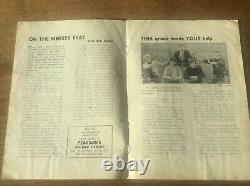 RARE Beatcomber JOHN LENNON - articles on Rolling Stones in magazine. It is believed Beatcomber was a pseudonym used by John Lennon who wrote for the Mersey Beat Magazine.

This is a magazine without the cover. It features articles written by John Lennon of The Beatles on The Rolling Stones who were playing at Bridlington Spa and they chose to ban the people attending wearing jeans and leather jackets. It includes interviews with Bill Wyman and Mick Jagger, and quotes from Charlie Watts, Brian Jones and Keith Richards.. Wyman States he disagrees with the clothing ban.

Wyman speaks about his long hair and going to dance halls wearing wide trousers over the top of tight ones to get entry into the event. He also talks about people having to wash before they go to such events. There is a second interview with Mick Jagger he also said the Spas rule was ridiculous. I believe this magazine may have been called Mersey Beat or Beatcomber, as some of the articles refer to Beatcomber exclusives.

However, John Lennon is known to have wrote in the Mersey Beat Magazine under the pseudonym Beatcomber. I can find no reference to this magazine, but looking at the articles it is clearly covering East Yorkshire and Hull. I estimate this dates to circa 1964. The other articles and illustrations / photos include. Road - Runners Driffield R n' B outfit.

Mark Anthony & The Avengers. The Aces, an East Riding beat band. The Mc Coys from Selby, including Liz Jackson and Joan Cooper and Paul Tosh O Neil, they played at Hornsea. Hulls Barry Graham and the Mustangs.

Pocklingtons Roy and the Zeroes. There are also many local advertisements for clubs, pubs and beers etc. This is a great piece for anyone interested in John Lennon or Beatles memorabilia.

Likewise it will appeal to lovers of The Rolling Stones and anyone interested in 1960s music in East Yorkshire, and especially the Beat Music scene. A great piece of Ephemera. If anyone can clarify it would be appreciated. This item is in the category "Music\Music Memorabilia\Artists/ Groups\Rolling Stones". The seller is "quirkyvintageandbooks" and is located in this country: GB.