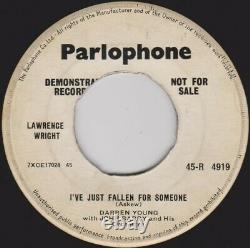 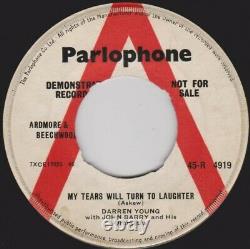 Both songs are credited as composed by John Askew, which is Darren Young's real name. Previously Darren Young had used the stage name Johnny Gentle. Two years before this record was released John Lennon, Paul McCartney, George Harrison and Stuart Sutcliffe, as The Silver Beetles, were Johnny Gentle's backing group for his May 1960 tour of Scotland. It was during this tour that Johnny Gentle and John Lennon co-wrote the song'I've Just Fallen For Someone'. The record is in VG Condition with the original juke-box middle punched-out.

A very unusual and rare piece of original Beatles related vinyl memorabilia. This item is in the category "Entertainment Memorabilia\Music Memorabilia\Rock & Pop\Artists B\Beatles\Other Beatles Memorabilia". The seller is "horizontalman" and is located in this country: GB.