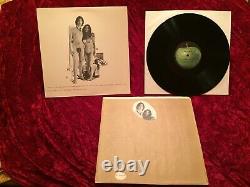 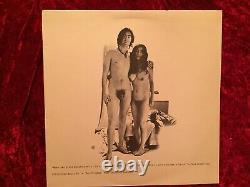 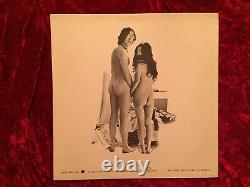 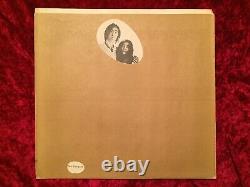 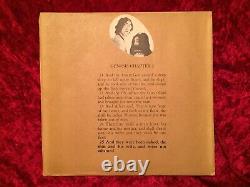 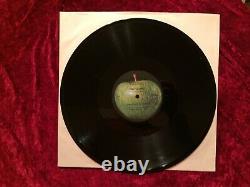 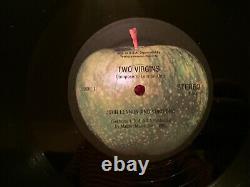 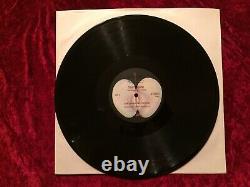 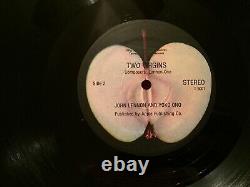 Has a mark on side 2 that does not affect the sound quality. Apple Photo Labels are Clean and Bright.

This is the Original 1968 Apple 1st Pressing! One of the most notorious records in history, especially considering that it is rarely listened to on its own merits.

Famously rejected for distribution by Apple's longtime distributors, Capitol, the deed went to Tetragrammaton. Ringo's first reaction to seeing his famous, married bandmate naked on the cover a record with his lover beside him, is my favorite: he remarked to John: I see you have The (London) Times, there... In the Dead Wax: Side 1: T-5001-1. Nice high gloss on cover. Front and back of cover artwork and text are rich, clear and bright, with minimal storage wear on the top and bottom of the front cover. Seams, corners and spine are solid and clean, essentially flawless. See my other listings for other Beatles & Related items. I also have a treasure trove of Beatles LPs, 45s and memorabilia yet to be listed. Let me know what you're looking for.

I wipe the dust off of every cover with clean, unscented baby wipes. I professionally clean the vinyl. (I also operate a Vinyl Record Cleaning business for your dusty/dirty records--if interested, send me a message). Do this for all of your selections and then go to your cart to checkout. Feel free to ask any questions and happy shopping!

If you're unsatisfied, please let me know so we can resolve it. First and early pressings are pressed from the first generation lacquers and stampers. They usually sound vastly superior to later issues/re-issues (which, in recent times, are often pressed from whatever'best' tapes or digital sources are currently available) - many so-called'audiophile' new 180g pressings are cut from hi-res digital sourcesessentially an expensive CD pressed on vinyl. Why experience the worse elements of both formats?

These are just High Maintenance CDs, with mid-ranges so cloaked with a veil as to sound smeared. They are nearly always compressed with murky transients and a general lifelessness in the overall sound. There are exceptions where re-masters/re-presses outshine the original issues, but they are exceptions and not the norm. First or early pressings nearly always have more immediacy, presence and dynamics.

Balances are firmer in the bottom end with a far-tighter bass. Upper-mid ranges shine without harshness, and the overall depth is more immersive. On first and early pressings, the music tends to sound more alive and vibrant. The physics of sound energy is hard to clarify and write about from a listening perspective, but the best we can describe it is to say that you can'hear' what the mixing and mastering engineers wanted you to hear when they first recorded the music. At the time of its release, this duo album by John Lennon.

Gained its greatest notice for its cover, a photograph that depicted the two standing before the camera naked. The recording, too, can be described as naked, in that it contains no music that would interfere with one's ability to hear the normal sounds of life.

The record is not unlike what you might get if you turned on a tape recorder for a random half-hour in your home -- snatches of inaudible conversation far away from the microphone, footsteps, wind, and so on. Conceptual "music" in the Cage. Ian sense, yes, but not popular music of the kind with which John Lennon. Had been previously associated in any sense at all.

The item "JOHN LENNON & YOKO ONO Two Virgins NM 1968 RARE Apple T-5001 1ST PRESS! BEATLES" is in sale since Monday, November 2, 2020. This item is in the category "Music\Records". The seller is "thelicoricepizza" and is located in Sonoma, California.