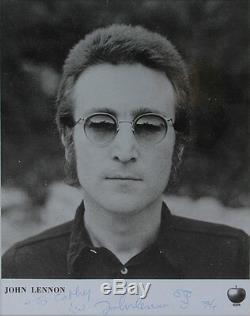 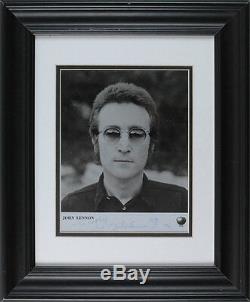 John Lennon extremely rare 1974 "Lost Weekend" era signed Apple 8"X10" publicity photo made out "To Cathy, Love John Lennon'74"with self portrait caricature. John Lennon signed photographs are highly desirable and much sought after by collectors , especially ones that John did his self portrait caricature on them, as they seldom are a rare find. This signed photograph comes from a very pivotal and well publicised period in John's life, he was separated from Yoko and went on a journey that lasted about 18 months and is most remembered for John getting tossed out of The Troubadour in Los Angeles with Harry Nilsson. What most forget is that it was a very productive period for John in which he recorded the "Mind Games" album (John and Yoko relationship soured during the recording of "Mind Games"), the "Rock N' Roll album, John produced Harry Nilsson's "Pussycats" album and most importantly John's "Walls and Bridges of which some critics say was John's best solo release.

This publicity photo was originally meant to be used to promote the release of the "Mind Games" album, but with John's life in disarray at the time and it was used well after its release. Note the second scan shown shows this photo framed, it's no longer housed in the frame shown. I have been collecting music memorabilia for over forty years now.

When you have the chance to, take a look at the other items I have listed for sale, you might find something that may be of interest to you. The item "John Lennon The Beatles Apple Photo Signed Autograph with Caricature Lost Weekend" is in sale since Thursday, October 10, 2019. This item is in the category "Entertainment Memorabilia\Music Memorabilia\Rock & Pop\Artists B\Beatles\Other Beatles Memorabilia". The seller is "pinnacleartists" and is located in Staten Island, New York. This item can be shipped worldwide.