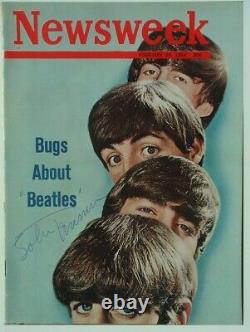 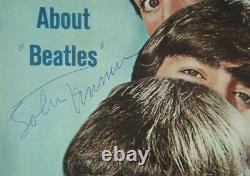 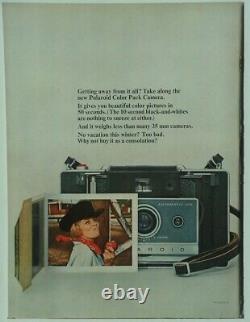 This is an AUTHENTIC HAND SIGNED ORIGINAL VERY RARE Vintage 8 1/2"x 11" complete and clean w/o address label NEWSWEEK MAGAZINE issue February 24, 1964 with THE BEATLES on the front cover featuring the autograph by JOHN LENNON. The feature Story "Bugs About Beatles". Considered to be the very first US magazine to feature The Beatles on the cover and they definitely got it wrong - "the Beatles suck" - yeah, they said that! John Winston Ono Lennon MBE (born John Winston Lennon, 9 October 1940 8 December 1980) was an English singer, songwriter and peace activist who gained worldwide fame as the founder, co-lead vocalist, and rhythm guitarist of the Beatles.

His songwriting partnership with Paul McCartney remains the most successful in history. In 1969, he started the Plastic Ono Band with his second wife, Yoko Ono. After the Beatles disbanded in 1970, Lennon continued as a solo artist and as Ono's collaborator. This is an awesome autographed piece of entertainment memorabilia and will look great framed.

This signed photo comes with a Certificate of Authenticity. All of the autographed items I have listed are from my personal collection. They were either obtained by me personally from the celebrity(s) or through a reputable dealer. If not satisfied with this item you may return it within 10 days. This photo is boldly signed and is in Xlt.

All photos are sent in either top loaders and/or archival acid free backer boards and clear plastic sleeves. CHECK OUT OUR MANY OTHER GREAT ITEMS LISTED! The item "JOHN LENNON Signed NEWSWEEK Magazine Feb 24, 1964 The Beatles withCOA" is in sale since Friday, February 26, 2021. This item is in the category "Entertainment Memorabilia\Autographs-Original\Music\Rock & Pop\Photographs". The seller is "moviemusiccollect" and is located in Cambria, California. This item can be shipped worldwide.