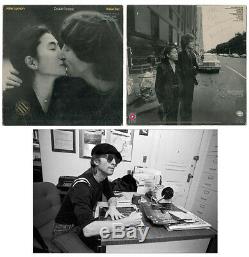 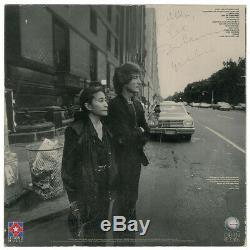 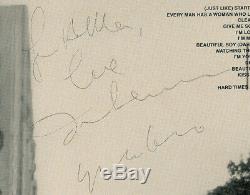 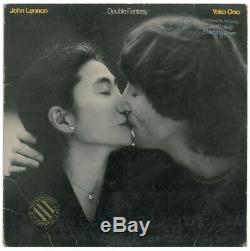 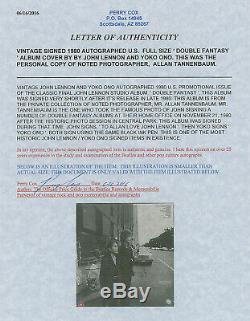 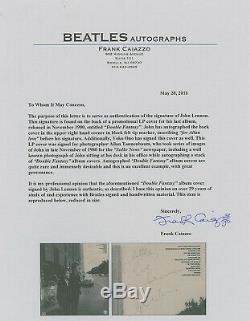 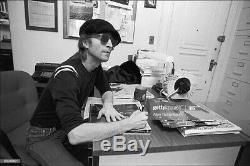 In fine condition, with some light edge creasing. Accompanied by full letters of authenticity from Perry Cox and Frank Caiazzo, who writes: This LP cover was signed for photographer Allan Tannenbaum, who took [a] series of images of John in late November of 1980 for the'SoHo News' newspaper, including a well known photograph of John sitting at his desk in his office while autographing a stack of'Double Fantasy' album covers. Autographed'Double Fantasy' album covers are quite rare and immensely desirable and this is an excellent example, with great provenance. " Additionally, Cox notes that this album is indeed one of the Double Fantasy albums signed "at their home office on November 21, 1980 after the historic photo session in Central Park, " a distinction he believes elevates this album as " one of the most historic. Although Double Fantasy received mixed reception from music critics upon its release on November 17, 1980, the murder of Lennon by Mark David Chapman on December 8, 1980, prompted fans and critics alike to reexamine the work.

It became a commercial success soon thereafter, and Double Fantasy went on to win the 1981 Album of the Year award at the 24th Annual Grammy Awards. In addition to the stack of Double Fantasy albums signed at his Studio One home office, Lennon also signed a copy for his would-be assailant some six hours before his tragic death.

This item was signed by John and Yoko on November 21st 1980. John was photographed signing the album sitting at his desk by Soho Weekly News photographer Allan Tannenbaum. To date this is one of only two Double Fantasy albums that Lennon is photographed signing, the other being the one signed to his would be killer Marc Chapman. An unthinkably rare piece from the final days of Lennons life. This presents an incredibly rare opportunity to own an investment grade collectible.

To date there are 12 signed Double Fantasy albums known to exist, only two with photographic evidence of Lennon signing. The fact that this album is a gold foil promo copy denotes that it was from Lennon's private stock of promo albums.

This is a handy way to differentiate between albums Lennon gave to family and friends versus those signed on the street which were all standard copies. This piece comes with a trove of provenance and has featured in the book John and Yoko: A New York Love Story. It is undoubtedly an opportunity that will rarely present itself.

This piece comes with authentication documents from both Perry Cox and Frank Caiazzo as well as from the original recipient Allan Tannenbaum. It will also include a copy of the photograph of John signing this piece. Any questions please do not hesitate to get in contact. The item "JOHN LENNON SIGNED DOUBLE FANTASY ALBUM WITH FULL PHOTO PROVENANCE THE BEATLES" is in sale since Thursday, June 4, 2020.

This item is in the category "Collectables\Autographs\Certified Original Autographs\Music". The seller is "webuythebeatles" and is located in Sunderland. This item can be shipped worldwide.