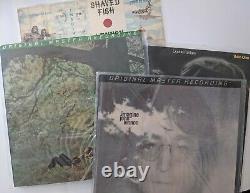 For sale are four John Lennon LPs. Shaved Fish and Double Fantasy have also been cleaned using the Library of Congress method, stored in plastic sleeves, and only played on properly configured Rega RP1. These have just been sitting on my shelf, not being listened to and it needs a new home. Pictures are of the actual item you will receive.

I'm not a professional grader, so grades are my best estimate based on the guide below. Please see the pictures for final details on condition. These are absolutely perfect in every way. ==== NEAR MINT (NM OR M-) ====.

A good description of a NM record is it looks like it just came from a retail store and it was opened for the first time. NM records are shiny, with no visible defects.

Writing, stickers or other markings cannot appear on the label. If played, it will do so with no surface noise. NM records dont have to be never played; a record used on an excellent turntable can remain NM after many plays if the disc is properly cared for. NM covers are free of creases, ring wear and seam splits of any kind. ==== VERY GOOD PLUS (VG+) ====.

A VG+ cover might have some very minor seam wear or a split (less than one inch long) at the bottom, the most vulnerable location. Also, a VG+ cover may have some defacing, such as a cut-out marking. ==== Very Good (VG) ====.

Many of the imperfections found on a VG+ record are more obvious on a VG record. VG records have more obvious flaws than their counterparts in better shape. They lack most of the original gloss found on factory-fresh records. Groove wear is evident on sight, as are light scratches deep enough to feel with a fingernail. When played, a VG record has surface noise, and some scratches may be audible, especially in soft passages and during a songs intro and ending.

But the noise will not overpower the music otherwise. Ring wear in the middle or along the edges of the cover where the edge of a record would reside, is obvious, though not overwhelming. Some more creases might be visible. Seam splitting will be more obvious; it may appear on all three sides, though it wont be obvious upon looking. Someone might have written or it or stamped a price tag on it, too. Good does not mean bad! The record still plays through without skipping, but it has significant surface noise and groove wear, and the label is worn, with significant ring wear, heavy writing, or obvious damage caused by someone trying to remove tape or stickers and failing miserably. ==== POOR (P) and Fair (F) ====.

Records are cracked, impossibly warped, or skip and/or repeat when an attempt is made to play them. Still-sealed albums can and do bring even higher prices than listed. United Kingdom of Great Britain and Northern Ireland. The item "John Lennon PLASTIC ONO BAND IMAGINE LP Record MFSL Mobile Fidelity Beatles MORE" is in sale since Saturday, April 17, 2021.

This item is in the category "Music\Records". The seller is "geekmaked" and is located in Boulder, Colorado.