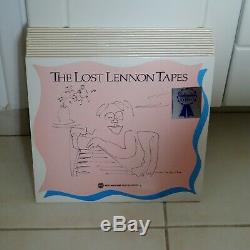 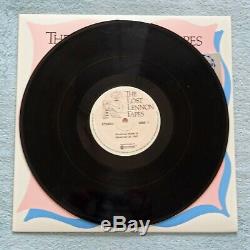 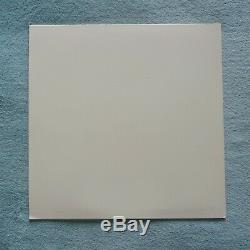 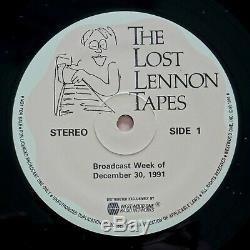 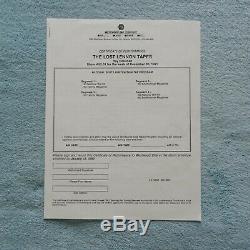 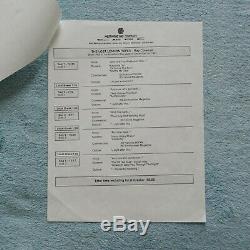 John Lennon Lost Lennon Tapes Westwood One (2xLP) 13 Volumes USA Promo Only. John Lennon Lost Lennon Tapes (2xLP) 13 volumes (from show 92-01 30th December 1991 to show 92-13 March 1992 the last Lost Lennon Tapes show which is 13 shows in total each show 2 x LP's) which each volume has its own cue sheet and anti static polythene sleeves and is pressed on high quality vinyl as it was only for Promotional use Only never for sale to the general public which was why they were pressed in very limited quantities. Issued by Westwood One for record stations across the USA to play on radio airplay. Each show is about an hour long with interviews and narration on each show make these highly collectible. Roughly each record weighs about 106-115.

All the issues have the same sleeve of a John Lennon drawing with a plain white rear and no text on the spines. I have listed the most interesting tracks (there are more tracks than listed below) at the time of release in 1991 & 1992 some of the tracks were previously unreleased and some still are. How Do You Sleep (Alternate Mix). Out Of The Blue (Alternate Mix). Rock And Roll People (Unreleased).

Whatever Gets You Through The Night (Composing Demo). I Saw Her Standing There - John & Elton (Rehearsal). Im Steppin Out (Take 1).

Grow Old With Me (Demo). I Don't Wanna Face It (Outtake).

You Saved My Soul (Demo). Gone From This Place (Demo).

Mirror Mirror On The Wall (Demo). One Of The Boys (Demo). Make Love Not War (Demo).

Child Of Nature/Jealous Guy/Dakota Mind Movie Mystery Theatre (Unreleased Medley). I'm The Greatest (Demo). (Just Like) Starting Over (Alternate Take). EX+ to NM No rips tears all like new. NM All superb with no signs of spindle wear or marks like new. NM All play superb no problems on top quality vinyl and are flat with no warpage, jumping, skipping or clicks or marks.

Please note that the record has been professionally cleaned on a record cleaning machine with a non alcohol cleaning solution. I use the following grading system. The record/sleeve is brand new condition.

Just like when first pressed and the record will have no deterioration in sound quality. All items including lyric sheet poster etc are in perfect condition. The record or sleeve may just marginally be off new condition and have the odd minor flaw.

The record has been played numerous times and the sound quality has deteriorated and plays with distortion. The cover will have seam splits, scuffing of edges, discolouration and creases/ing. The record has not been cared for properly and has loud surface noise but is still just playable.

The sleeve will be torn, stained/defaced. The record will not play properly due scratches and will have bad surface noise. The cover will be damaged and even have parts missing. The record is unplayable possibly broken, which would only be considered as a collection filler. I use a plus and minus signs +/. To show if marginally better or worse condition. I never send out any parcel I wouldn't be happy to receive myself! All records are removed from their sleeves and placed in a new plastic sealable sleeve for posting! The item description is very detailed and I have listed the item to the best of my knowledge. The item "John Lennon Lost Lennon Tapes (The Beatles) (2xLP) 13 Volumes!

US Promo Only" is in sale since Wednesday, May 1, 2019. This item is in the category "Music\Records".

The seller is "carmensilvera" and is located in Paphos. This item can be shipped worldwide.