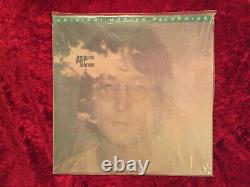 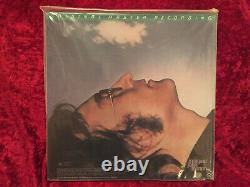 I pay top dollar for quality record collections. This is the audiophile acclaimed Mobile Fidelity Sound Lab Pressing of the Original Master Recording of John Lennon's Masterwork of 1971!

N the late 1970s earned a reputation for high-quality audio from its Original Master Recording LPs, which were recorded with its half-speed mastering process. Specially Plated and Pressed on High Definition Super Vinyl by Victor Company of Japan. Each disc is housed in a special static-free, dust-free sleeve. The Recording is sourced from the Original Stereo Master Tape. Mastered with the Ortofon Cutting System. As far as consumer access to Original Masters, having this copy of Lennon's Imagine is the highest quality recording available today, bar none. With the lush orchestrations, the hypnotically dense layering of the hard rock cuts and Phil Spector's Wall Of Sound treatment to Lennon's work, you are in for a treat... Allmusic gives it 5 stars!! Special MFSL Heavy Duty Packaging. Nice high gloss on cover. Front and back of cover artwork and text are rich, clear and bright, essentially flawless. Seams, corners and spine are solid and clean, essentially flawless. Spine print is crystal clear.

The record appears straight; when I look down with one eye down all 4 edges there's no big, ominous bow to it that would suggest that it's warped. I will gladly accept the return of Sealed records as long as they have not been opened i. As long as they are still in the condition I sent them in. Yep, there are a few rotten apples out there! I will not accept a previously sealed record that has been opened, even if the complaint is that the record is warped.

This is why I look down the edge of all 4 sides of the record, to assess for potential bowing. Look for that in the description of the covers of all my Sealed items. By the way, I've never knock on wood! See my other listings for other Beatles & Related items. I also have a treasure trove of Beatles LPs, 45s and memorabilia yet to be listed. Let me know what you're looking for. Do this for all of your selections and then go to your cart to checkout. , ETC WITH THE ITEMS YOU WANT, AND CREATE A LISTING WITH THE EXACT WEIGHT OF YOUR LOT. OR, FEEL FREE TO ASK QUESTIONS. Feel free to ask any questions and happy shopping! If you're unsatisfied, please let me know so we can resolve it. First and early pressings are pressed from the first generation lacquers and stampers. They usually sound vastly superior to later issues/re-issues (which, in recent times, are often pressed from whatever'best' tapes or digital sources are currently available) - many so-called'audiophile' new 180g pressings are cut from hi-res digital sources. Essentially an expensive CD pressed on vinyl.

Why experience the worse elements of both formats? These are just High Maintenance CDs, with mid-ranges so cloaked with a veil as to sound smeared.

They are nearly always compressed with murky transients and a general lifelessness in the overall sound. There are exceptions where re-masters/re-presses outshine the original issues, but they are exceptions and not the norm.

Balances are firmer in the bottom end with a far-tighter bass. Upper-mid ranges shine without harshness, and the overall depth is more immersive. On first and early pressings, the music tends to sound more'alive' and vibrant. The physics of sound energy is hard to clarify and write about from a listening perspective, but the best we can describe it is to say that you can'hear' what the mixing and mastering engineers wanted you to hear when they first recorded the music. After the harrowing Plastic Ono Band.

While the album had a softer surface, it was only marginally less confessional than its predecessor. Underneath the sweet strings of "Jealous Guy" lies a broken and scared man, the jaunty "Crippled Inside" is a mocking assault at an acquaintance, and "Imagine" is a paean for peace in a world with no gods, possessions, or classes, where everyone is equal. Doesn't shy away from the hard rockers -- "How Do You Sleep" is a scathing attack on Paul McCartney. "I Don't Want to Be a Soldier" is a hypnotic antiwar song, and "Give Me Some Truth" is bitter hard rock. Doesn't have the thematic sweep of Plastic Ono Band. It is nevertheless a remarkable collection of songs that Lennon.

Would never be able to better again. This item is in the category "Music\Vinyl Records".