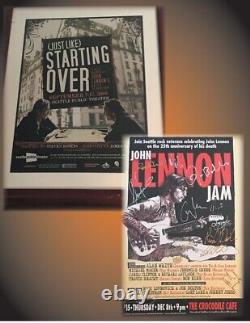 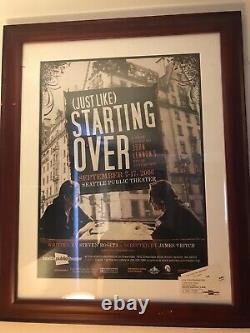 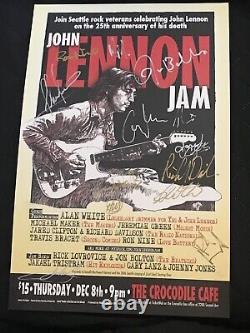 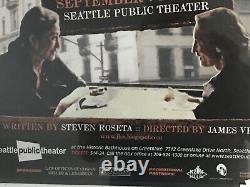 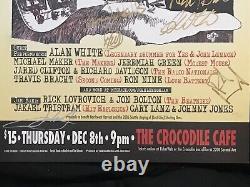 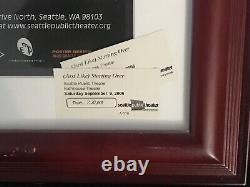 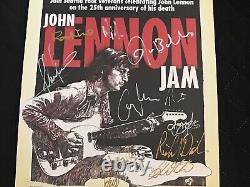 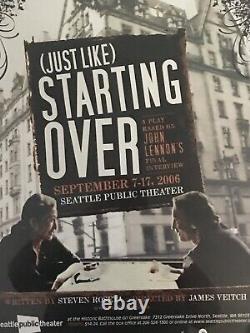 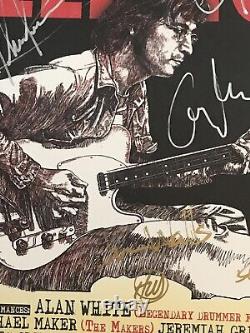 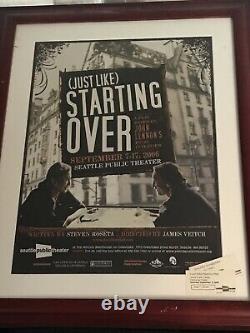 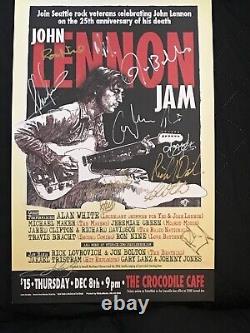 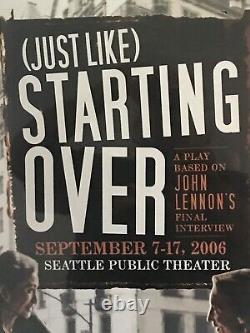 They're not cheap, but they are available with 10% of the of the proceeds being donated to THE PLANNED PARENTHOOD FEDERATION of AMERICA. Own these two pieces of John Lennon history and you'll definitely be the guy whom all others will envy while stepping up for a.

I believe John would approve. Up for sale are two of the most incredible, visually striking and truly rare posters you'll ever hope to see or own in honor of the mighty John Lennon. The first poster is from the 2006 Seattle Public Theaters World Premiere of "(Just Like) Starting Over".

This a stage play based on John Lennon's and Yoko Ono's final unpublished interview. The actual poster size is 17 ½ X 24 ½ but with the handsome wood frame along with the complimentary colored matting, it measures out to a generous 32" X 26 ½". It even has our tickets stubs framed along with it. There are a few knicks in the frame but.

It will still look truly amazing on full and prominent display for you and your family and friends enjoyment in your home or perhaps on your office wall. And from 2005, the John Lennon Jam Concert. An 11" X 17" gig Poster has never been framed.

This striking poster has been signed by all the musicians and by the artist who designed it. It is a numbered limited edition; Number 60 of 75; that's right, there were only 75 ever produced and then, back in 2005, 17 years ago. Consider this, It my very well be that this is the only one left in the entire world documenting this one night only concert. "(Just Like) Starting Over" was brought to the stage by Seattle playwright Steven Roseta and presented by British director James Veitch.

This dynamic and touching play was largely based on an unpublished interview with John, together with Yoko Ono, granted mere hours before he was tragically murdered on December 8, 1980. The powerful play was performed at the historical Bath House Theater and starred actors of the Seattle Public Theater, a non-profit professional theater on the shores of Greenlake in Seattle, WA. The theater seats only 165 and with only a ten day run, September 7 through 17, the seats were the hottest tickets in town. Another incredible aspect about this poignant play was that this dialogue-driven story was performed in the round. The audience was transformed into guests sitting in the Lennon's home in the Dakota Apartment Building listening in as the interviewer, Dave Sholin, conducted a near-three-hour interview, in which the pair talk about a myriad subjects, on that fateful day. They talked openly about emerging from John's five years of seclusion, to the release of the Double Fantasy album, the reversing of the traditional domestic roles, and a newly found familial bliss.

It is revealed how the marriage of minds between John and Yoko yielded so many complex artistic and political statements. Rendering a timeless relevance to his art and words. John's intriguing commentary on such transformations as the anti-war movement, terrorism, women's rights, religious freedom, racial equality, and the ultra-rights politics that echo clearly into our world today. Now the play was only half the story. Nine months earlier, December 8, 2005, the first John Lennon Jam took place at the famous Crocodile Café, Seattle, WA.

Which opened in September of the following year. ALLOW ME TO LEAVE YOU WITH THIS. If you're just a John Lennon fan or an experienced collector looking to grow your collection or perhaps you're interested in purchasing as an investment, this is the perfect opportunity for you to own these two extremely rare and valuable pieces of John Lennon history. Thank You for your consideration. This item is in the category "Entertainment Memorabilia\Music Memorabilia\Rock & Pop\Artists L\Lennon, John".

The seller is "imabeachrat" and is located in this country: US. This item can be shipped to United States.