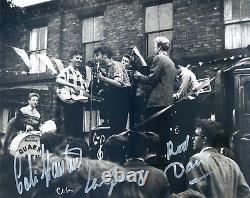 I was raised in Liverpool where my personal encounters with JOHN LENNON and the QUARRYMEN began, and where I captured the very first photos of John and the lads, two weeks prior to him meeting Paul. I still remain personal friends with Len Garry, Colin Hanton and Rod Davis, who as you know, are original members of John Lennon's first group - The Quarrymen.

I personally sell my photos and book, as a guest vendor, during Beatles Festivals in England and the USA, in addition to making them available here. I took this photo when I was a teenage friend of JOHN and the QUARRYMEN who kindly agreed to appear for free at my Rosebery Street Party.

I have now released it as a limited edition of 500. Each photo is HAND SIGNED by the three active Quarrymen - Colin Hanton, Len Garry and Rod Davis, plus my own signature, Charles Roberts. It comes with a certificate of authenticity and would make a great addition to any Beatles collection. The photo is 10" x 8" and with the mount it is 14"x 11" approx. This is a very rare print that has been re-mastered by Tim Ware of Hyperarts, USA, and produced on high quality photographic paper and using the Giclee method by JAK Fine Art UK.

This is a unique opportunity to get a print that cannot be repeated - A true piece of Rock n' Roll history! Our first appearance was in Rosebery Street - they had this party out in the street.

We played from the back of a lorry - we didn't get paid. We played at parties after that; perhaps got a few bob, but mostly we just played for fun. We didn't mind about not being paid.

I was a teenage friend of John and the Quarrymen when I booked them for their first ever documented appearance. At the time it was just a fun day with my pals, and I never realized how momentous my photo's would become. Being the first ever, they are regarded as iconic by Beatle fans everywhere and are of great historic importance.

THE FIRST EVER PHOTOGRAPH of JOHN LENNON and THE QUARRYMEN PERFORMING LIVE THAT SHOULD CERTAINLY APPRECIATE IN VALUE. Please beware of cheap copies which are worth nothing. The item "JOHN LENNON and his QUARRYMEN RARE PHOTO NUMBER 1" is in sale since Sunday, June 28, 2020. This item is in the category "Collectables\Photographic Images\Contemporary (1940-Now)". The seller is "diondee123" and is located in Liverpool. This item can be shipped worldwide.