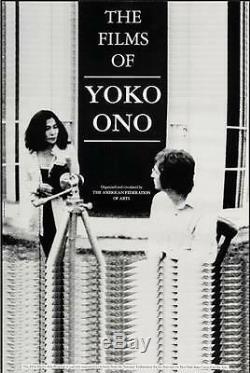 The FILMS OF YOKO ONO (1991). Vintage movie poster created for the 1999 retrospective of Yoko ONO's short movie filmed between 1966 and 1970 featuring John LENNON.

Will be sent safely rolled wrapped in a plastic sleeve then inserted in a sturdy cardboard tube. For larger quantities, a separate invoice will be sent. This is one of the many movie and music posters which can be found at ILLUSTRACTION GALLERY - ART THAT POPS! A brand new online poster gallery devoted to the celebration of the poster artists behind the art of the movie, music and comic book. We only sell Vintage and rare posters (no cheap reproductions).

This item is in the category "Entertainment Memorabilia\Movie Memorabilia\Posters\Originals-United States\1990-99". The seller is "illustractiongallery" and is located in New York, New York. This item can be shipped worldwide.