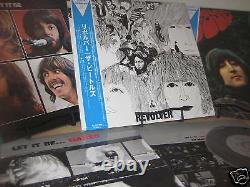 THE BEATLES - THIS IS A FOUR JAPAN OUT OF PRINT TOSHIBA/EMI 2003 LIMITED EDITION OBI SET WITH THESE 4 TITLES - REVOLVER - SEALED LP Ranked the Number One LP in Rock N Roll History - RUBBER SOUL - LET IT BE & LET IT BE NAKED. JUST TRY TO FIND THESE FOUR TITLES IN THESE JAPAN LIMITED EDITIONS.

THEY ARE JUST GONE FROM THE VINYL MARKET. THIS IS A MYMUSICFIX SPECIAL PACKAGE AND IS A ONE TIME OFFERING AT THIS PRICE. PROBABLY THE MOST LIMITED EDITION HIGH QUALITY PRESSINGS EVER OF THESE BEATLES TITLES. THAT HOW RARE THESE RELEASES ARE WITHIN THE COLLECTORS MARKET. NO ONE CAN BEAT THIS PRICE.

SO DON'T MISS OUT THIS BEATLES COLLECTIBLE FOR YOUR TURNTABLE OR COLLECTION. EACH album has been direct-metal-mastered from original STEREO pressing to give the best possible sound quality.

Mymusicfix has listened to THEM AND IT SOUNDS GREAT AS ALL COLLECTORS KNOW ABOUT JAPANESE QUALITY PRESSINGS! JUST TRY TO FIND THIS TITLE IN THESE JAPAN LIMITED EDITIONS. THEY ARE JUST GONE FROM THE VINYL MARKET AND IS A ONE TIME OFFERING AT THIS PRICE. FEATURES Rare, Limited Edition, one-time pressing - booked on futures - immediately Out of Print IN 2003 THAT HOW LIMITED THESE PRESSINGS WERE - OBI sash - Japanese Pressed by Toshiba/EMI.

To protect the covers from damage. Once inside the our warehouse we then protectively seal the title in a loose re-sealable plastic cover to ensure the quality of the product. This title is brand new & never played condition. & TYPE IN THEBEATLES INTO THE SEARCH FIELD WITHIN OUR STORES SECTION AS YOUR PERSONAL CODE AND ALL INDIVIDUAL TITLES + INFORMATION WILL APPEAR.

The nicest thing you can do for your stylus and your ears. The ultimate record -- the way music was meant to be heard. LET IT BE NAKED - 20 page booklet and 45 RPM 7 BONUS disc.

ORIGINAL 1ST EDITION ISSUE FROM JAPAN. The Beatles have often spoken about how Phil Spector drowned their sound in orchestration on the original Let It Be , released in 1970, and Paul McCartney has vowed to rewrite history by having the version originally intended finally released and that's what we have here. Here it is with an additional 7 Disc of Fly On The Wall, a unique insight into the Beatles at work in rehearsal and in the studio during January, 1969. The Long And Winding Road 5.

I've Got A Feeling 7. Don't Let Me Down 9. Often gets a bad rap. Unfairly, as it's often as charming, well written, and.

Rocking as the Beatles' "better" albums; it's also more outright fun than. The masterpiece it followed into the stores. With Lennon and McCartney working together on the perfect "I've Got a Feeling, " "Two of Us, " and "Dig a Pony, " it's hard to believe these guys were about to go their separate ways. I've Got A Feeling.

The Long And Winding Road. Rank them how you like, RUBBER SOUL is an undeniable pivotal point in the Fab Fours varied discography no matter where, or how, you first heard it. The transition from mop-tops to experimenting musicians began with RUBBER SOUL! John wrote one of his most sensible love songs with In My Life.

The Word can be read as a pre-psych warning shot; the sitar-laden Norwegian Wood and the evocative Girl (written the last night of the sessions) stand as turning points in John Lennons work. George also emerges with the McGinnis If I Needed Someone.

One of the greatest Albums of all time. Other tracks include: Drive My Car - You Wont See Me - Nowhere Man - Think For Yourself - Michelle - What Goes On - Girl - Im Looking Through You - In My Life - Wait - If I Needed Someone - Run For Your Life.

REVOLVER wouldn't remain the Beatles' most ambitious LP for long, but many fans remember it as their best. An object lesson in fitting great songwriting into experimental production and genre play, this is also a record whose influence extends far beyond mere they-was-the-greatest cheerleading.

Putting McCartney's more traditionally melodic "Here, There and Everywhere" and "For No One" alongside Lennon's direct-hit sneering Dr. Robert" and dreamscapes ("I'm Only Sleeping, " "Tomorrow Never Knows") and Harrison's peaking wit ("Taxman) was as conceptually brilliant as anything SGT. PEPPER'S attempted, and more subtly fulfilling. And Your Bird Can Sing. I Want to Tell You.

Got to Get You into My Life. OUT OF PRINT PRODUCT is IRREPLACEABLE and therefore NOT RETURNABLE. International Buyers are responsible for their countrys. For additional Rare, Out of Print, Factory-Sealed Audiophile Recordings, visit mymusicfix E-Bay Store by hitting the STORES TAB on this titles Home Page. Mymusicfix has been told we have the best collection of Rare, Out of Print music collectibles on E-Bay. OUT OF PRINT PRODUCT ONCE OPENED is IRREPLACEABLE and therefore NOT RETURNABLE. The item "BEATLES REVOLVER RUBBER SOUL LET IT BE + RARE NAKED OBI JAPAN 2003 OBI 4 LP SET" is in sale since Monday, September 26, 2011. This item is in the category "Music\Vinyl Records". The seller is "mymusicfix2" and is located in Lake Forest, California. This item can be shipped worldwide.