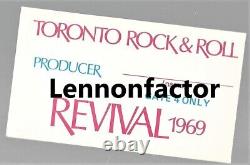 At the time, Rolling Stone called it the second most important event in rock'n' roll history. The revival was a one-day concert that featured John Lennon and the first gig for the Plastic Ono Band, The Doors, Alice Cooper, and Little Richard. Yoko's band featured Eric Clapton, Klaus Voormann and drummer Alan White.

Other performers were: Jerry Lee Lewis, Gene Vincent, Bo Diddley, Chicago, Junior Walker and the All Stars, Tony Joe White, Whiskey Howl, and Doug Kershaw. The pass measures 2 x 3 ½ inch and shows some age yellowing, otherwise in excellent condition. It is an original one!

The tilted photo and text "Lennonfactor" are for copy protection. This item is in the category "Entertainment Memorabilia\Music Memorabilia\Rock & Pop\Artists B\Beatles\Other Beatles Memorabilia".

The seller is "thelennonfactor" and is located in this country: US. This item can be shipped to United States.