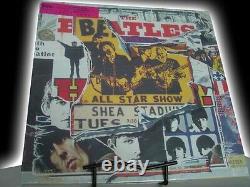 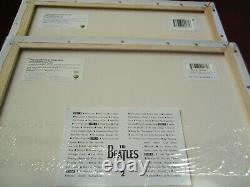 SECOND THIS ITEM IS FACTORY SEALED WITH THE PLASTIC WRAP. THIRD IS ON THE BACK JACKET THE LP HAS BOTH THE CAPITOL & APPLE LOGO'S AND IT SAYS MANUFACTURED BY CAPITOL RECORDS INC. UK VERSION ONLY HAS THE APPLE LOGO & DOESN'T HAVE THIS ADDITIONAL LANGUAGE UNDERNEATH THE LOGO OR LOGO'S. FORTH - AS NOTE IN PICTURE 2 THE CAPITOL APPLE/CAPITOL ISSUE HAS UNDERNEATH THE BARCODE ISBN -1-884409-23-7 + C1 7243 8 34448 1 6 +.

ALL THIS ADDS UP TO THE ORIGINAL USA ORIGINAL LIMITED USA 1996 RELEASE AND AS BEATLES COLLECTOR IT'S ALWAYS PARAMOUNT TO OWN 1ST EDITIONS. NOTE: BOTH THE UK & USA VERSIONS HAVE THE SAME BARCODE SO ONLY IF THE LATTER 3 FACTORS EXIST DO YOU OWN THE ORIGINAL USA OUT OF PRINT COLLECTORS RELEASE. THE UK VERSION IS STILL IN PRINT AND HAS NONE OF THESE ORIGINAL RELEASE FEATURES EXCEPT THE BARCODE.

COLLECTORS WANT ORIGINAL FEATURES TO THEIR BEATLES PRODUCTS AND IT'S ALL WITHIN THIS LISTING. FACTORY SEALED - PINK MARKETING STICKER & BOTH LOGO'S ON THE BACK. HOW MANY TIMES DO COLLECTORS HAVE A CHANCE OF OWNING A 1ST EDITIONS FROM THE BEATLES? 128 Minutes in length and long out of print.

& TYPE IN THEBEATLES OR FOR HIT COLLECTIONS USE THE CODE BIGHITS INTO THE SEARCH FIELD WITHIN OUR STORES SECTION AS YOUR PERSONAL CODE AND ALL INDIVIDUAL TITLES + INFORMATION WILL APPEAR. When you listen to them on that DVD you will understand the importance/history these Beatles and their engineer put to these anthology collections and why you should collect them. There a must for any true collector. It's so rare that on some of these tracks "The Beatles" themselves had a hard time remembering who was participating on some of these masters tracks. These Anthology 3 LP sets (One, Two and Three) are long out of print and are becoming rarer and more valuable day by day especially in these LP pressings. Enjoy being one of the last people in the world to own this rare piece of The Beatles history on vinyl. The second in the series of Rare unreleased Beatles recordings covers the groups famed middle period featuring George Harrisons classic track 11 out-take of TAXMAN. "TAXMAN", the opening title on REVOLVER was Harrisons acerbic and witty view of the inescapable realities of life.

Track 12 was the Master Recording this being a reduction or bounce of Track 11. These are terms for a recording process taken up by The Beatles around this time, where, by merging two or more existing tracks of a tape while copying it across to a second tape, vacant tracks are created allowing for further overdubbing. Abbey Road was still using 4-Track Recording Machines in 1966 so this process was often necessary. Backing vocals instead of the Mr.

George Harrison penned ONLY A NORTHERN SONG. Although not issued on disc until YELLOW SUBMARINE soundtrack Album in January of 1969, Harrisons ONLY A NORTHERN SONG was written and first intended for SGT. PEPPER, its place in the recording chronology coming between other PEPPER tracks, FIXING A HOLE and BEING FOR THE BENEFIT OF MR. The Master of ONLY A NORTHERN SONG combined Track 3 (with overdubs) and a reduction of this Track 11 (with further overdub), simultaneously mixed into Mono. The mixes presented here in Stereo and slightly sped up, is Track 3 the basic track from February 13th, 1967 with bass and guitar added on April 20th with unissued vocal tracks (yielding a number of lyric vibrations from the Master) overdub onto a separate reduction, Track 12, flown in.

The last Harrison penned track within ANTHOLOGY 2 is the Master of George Harrisons composition that opened Side 2 of SGT. PEPPERS LONELY HEARTS CLUB BAND, presented here in a fashion not previously available on Vinyl remixed, without Georges vocal from the different original 4-track tapes that formed that Master. WITHIN YOU WITHOUT YOU (instrumental) what remains, audible to the fore is a combination of tamboura, tabla, dilruba and swaramandal tracks recorded in March with violins, cellos, and Georges sitar track overdubbed on April 3, 1967. ANTHOLOGY 2 features out-takes, demos and alternate versions of songs from the albums, HELP, RUBBER SOUL, REVOLVER, SGT. PEPPERS LONELY HEARTS CLUB BAND, and MAGICAL MYSTERY TOUR.

There are also three previously unreleased Beatles Songs from 1965, several live cuts and the second of The Beatles new recordings, Real Love, which began as a late seventies demo and completed in 1995 by George Harrison, Paul Mc Cartney and Ringo Starr. You've Got to Hide Your Love Away [Version]. If You've Got Trouble.

Good Morning, Good Morning [Version]. Being for the Benefit of Mr. Lucy in the Sky With Diamonds [Take].

Within You, Without You [Instrumental]. Pepper's Lonely Hearts Club Band (Reprise) [Take].

For other Beatles/George Harrison titles, or hundreds of additional Rare, Out of Print, Factory-Sealed Audiophile Recordings visit the mymusicfix E-Bay Store by hitting STORES tab on this titles Home Page. What a tremendous HOLIDAY GIFT these Rare demos of George Harrison/Beatles will make any true fan!!

Mymusicfix has been told we have the best collection of Rare, Out of Print music collectibles on E-Bay. Pmccartney THEBEATLES FOLP 1&DONE 1&DONE2. FACTORY SEALED OUT OF PRINT PRODUCT is IRREPLACEABLE and therefore NOT RETURNABLE. The item "BEATLES ANTHOLOGY 2 OUT OF PRINT RARE USA 1ST EDITION 1996 3LP SET With 45 TRACKS" is in sale since Saturday, November 17, 2012.

This item is in the category "Music\Vinyl Records". The seller is "mymusicfix2" and is located in Lake Forest, California.