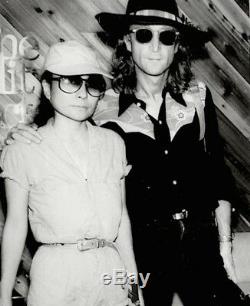 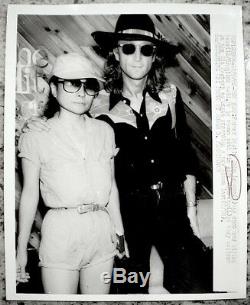 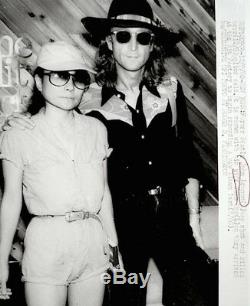 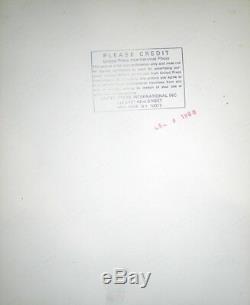 He is shown with his wife Yoko Ono as they arrived at the Hit Factory to begin recording a new album last 8/80. Bm/Exclusive UPI Photo By Roger D. Farrington DOUBLE FANTASY RECORDING SESSION & PHOTOGRAPHER HISTORY: August 7th 1980, Boston based photographer Roger Farrington got the job as the first authorized photographer to document the first day of the recording session for what would be Lennon & Onos final album together, Double Fantasy.

The Manhattan recording sessions were kept secret in case John had a change of heart. Yoko sought a freelance photographer with no ties to the New York media scene. Farrington met Lennon & Ono at their home at The Dakota at Central Park West & later followed them to the Hit Factory on 48th Street. Lennon was dressed in black, wearing a Western-style shirt, wide brimmed hat & happily singing. John carried a briefcase filled with sheet music.

He was energized, witty & with his long hair he looked every bit a rock star. Ono, attended to the business matters, as they did everything themselves with no managers or handlers. Farrington's photographs from the Hit Factory show Lennon looking obviously pleased to be back in the studio. On that first day, Lennon had recorded the album's first single Just Like Starting Over. The album sessions wrapped up on Sept.

22 & "Double Fantasy" was released by Geffen Records on November 17th, 1980. SIZE: 8x10 TYPE: B&W Glossy BORDER: No CONDITION: EXCELLENT, typical publishers black touch up on JL's leg PLEASE SEE: Cool Collectibles Condition Chart below for complete details... PHOTOGRAPH PROVENANCE: This is the actual vintage photograph produced by the music studio for promotion. Because they were printed in limited quantities, fewer than 10 may exist today.

Fragile and larger items are bubble wrapped and sent in sturdy boxes with peanuts. We maintain high standards on every level. CONDITION: Grading conditions are subjective. Be your own judge when deciding the condition of items vintage or new. We do have thousands of Positive Feedbacks and Return Customers.

We try to provide clear information with known historical background on all our auctions. We sell VINTAGE AUTHENTIC ORIGINAL COLLECTIBLES that are intelligent investments and will continue to increase in value.