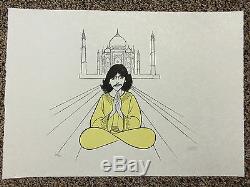 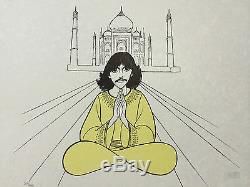 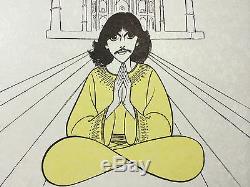 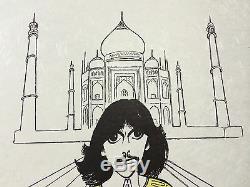 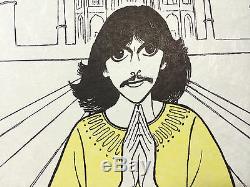 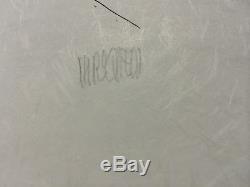 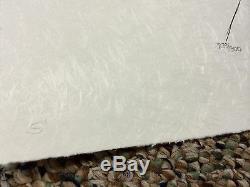 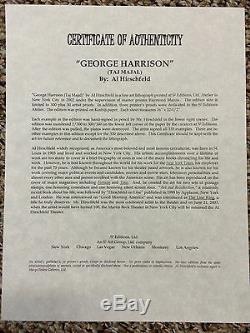 SUPER RARE, SUPER RARE, SUPER RARE!! We here at ARTS-N-Sports are PROUD to present the GORGEOUS work of the LINE KING Himself, Al Hirschfeld. This hand signed and numbered lithograph on texturally rich Japon paper at a size of 22.5 x. 16, and is absolutely GORGEOUS. Beautiful image of George Harrison. On the bottom left of the lithograph, is the S stamp from its publisher, S2 Art Group Ltd.

The piece also comes with the original Certificate of Authenticity from S2 Art Group Ltd. BRAND NEW, ONLY TAKEN OUT OF PACKAGING FOR PHOTOGRAPHS AND INSPECTION. Albert Hirschfeld (June 21, 1903 January 20, 2003) was a Jewish American caricaturist best known for his simple black and white satirical portraits of celebrities and Broadway stars. Louis, Missouri he moved with his family to New York City where he received his art training at the Art Students League of New York. In 1924 he traveled to Paris and London, where he studied painting, drawing and sculpture.

Hirschfeld's art style is unique, and he is considered to be one of the most important figures in contemporary caricature, having influenced countless cartoonists. Hirschfeld's caricatures are almost always drawings of pure line with simple black ink on white paper with little to no shading or crosshatching. His drawings always manage to capture a likeness using the minimum number of lines.

Though his caricatures often exaggerate and distort the faces of his subjects he is often described as being a fundamentally "nicer" caricaturist than many of his contemporaries, and being drawn by Hirschfeld was considered an honor more than an insult. Nonetheless he did face some complaints from his editors over the years; in a late-1990s interview with The Comics Journal Hirschfeld recounted how one editor told him his drawings of Broadway's "beautiful people" looked like "a bunch of animals".

Hirschfeld generally dismissed these complaints, and most observers would agree that time proved him right. He was commissioned by CBS to illustrate a preview magazine featuring the network's new TV programming in fall 1963. One of the programs was Candid Camera, and Hirschfeld's caricature of the show's host Allen Funt outraged Funt so much he threatened to leave the network if the magazine were issued. Hirschfeld prepared a slightly different likeness, perhaps more flattering, but he and the network pointed out to Funt that the artwork prepared for newspapers and some other print media had been long in preparation and it was too late to withdraw it. Funt relented but insisted that what could be changed would have to be.

Newsweek ran a squib on the controversy. Hirschfeld is known for hiding the name of his daughter, Nina, in most of the drawings he produced since her birth in 1945. The name would appear in a sleeve, in a hairdo, or somewhere in the background. Sometimes "Nina" would show up more than once and Hirschfeld would helpfully add a number next to his signature, to let people know how many times her name would appear. Hirschfeld originally intended the Nina gag to be a one-time gimmick but it soon spiraled out of control. Though Nina was a popular feature in his illustrations, with many enjoying the game of searching for them, on more than one occasion Hirschfeld would lament that the gimmick had overshadowed his art. On occasion he did try to discontinue the practice, but such attempts always generated harsh criticism. Nina herself was reportedly somewhat ambivalent about all the attention. In the previously mentioned interview with The Comics Journal Hirschfeld confirmed the urban legend that the US Army had used his cartoons to train bomber pilots with the soldiers trying to spot the NINAs much as they would spot their targets. Hirschfeld told the magazine he found the idea repulsive, saying that he felt his cartoons were being used to help kill people. In his 1966 anthology The World of Hirschfeld he included a drawing of Nina which he titled Nina's Revenge. That drawing contained no Ninas. There were, however, two Als and two Dollys ("The names of her wayward parents"). Hirschfeld collaborated with humorist S. Perelman on several projects, including Westward Ha! Or, Around the World in 80 Clichés, a satirical look at the duo's travels on assignment for Holiday magazine. The collection included drawings of Stan Laurel, Oliver Hardy, Edgar Bergen (with Charlie McCarthy), Jack Benny, Fanny Brice, Bud Abbott and Lou Costello.

He followed that with a collection of silent film stars including Rudolph Valentino, ZaSu Pitts and Buster Keaton. The Postal Service allowed him to include Nina's name in his drawings, waiving their own rule forbidding hidden messages in United States stamp designs. All Auctions must be paid within 3 days.

The item "Al Hirschfeld Hand Signed THE BEATLES George Harrison Lithograph John Lennon COA" is in sale since Tuesday, October 29, 2019. This item is in the category "Art\Art Prints". The seller is "artsnsports" and is located in Oceanside, New York.